Founded in 1949, the Maryland Court Reporters Association (MCRA) is committed to advancing the court reporting profession by promoting court reporters as experts in the field of verbatim court reporting, providing continuing education to its members while advocating quality service, high ethical standards, and the application of state-of-the-art technology.  MCRA has provided social and educational opportunities to the court reporting community in Maryland.  Our profession has changed since 1949, but we remain committed to the same goals and purposes.

The purposes of this Association: Join MCRA today or contact us at info@marylandcourtreporters with any questions. We are here to help! 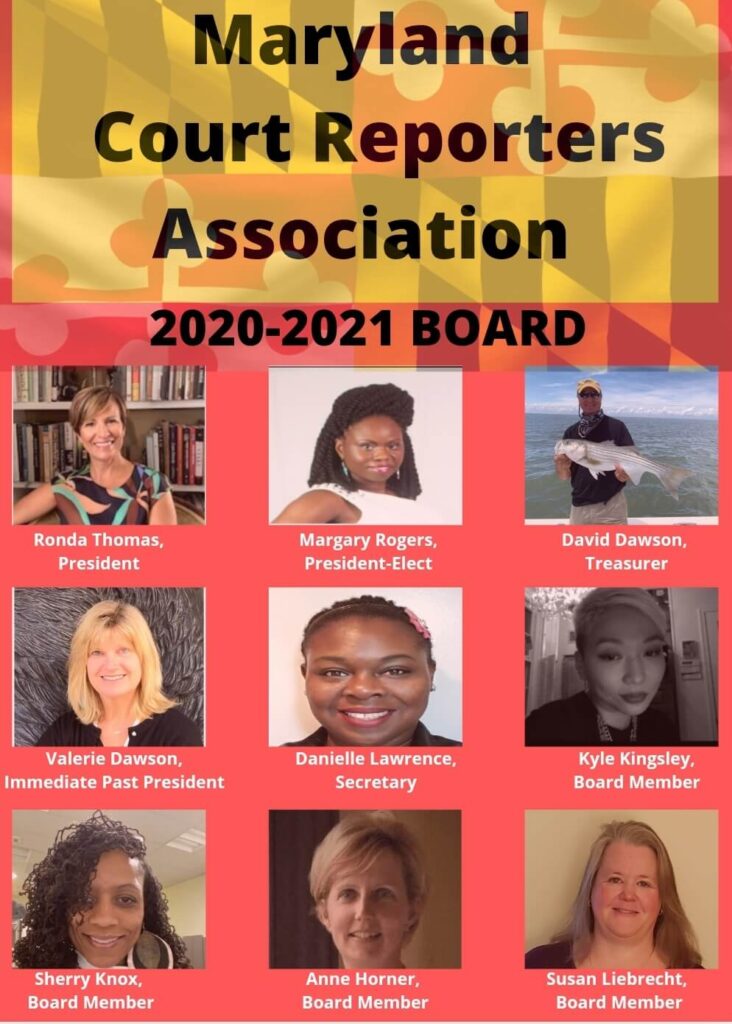 President
A Baltimore native and now living in Catonsville, Maryland. She started her freelance reporting career in 1990 after   graduating from Villa Julie College. During the early 2000s, she took a hiatus to stay home with her two sons who are now 17 and 19.

She recently was the host of a podcast that focused on    encouraging reporters to provide realtime by sharing her experiences during the past 30 years and some things she learned along the way.

Ronda enjoys hiking, going to the beach and country line dancing which is where she met her fiancé Larry who understands when she says,”I’ve got a daily,” that there will not be dinner!

Ronda recently accepted an Official Reporter position at the United States District Court in Baltimore, Maryland, and she is looking forward to a new chapter in reporting.

President-Elect
Margary Rogers , RPR, CRI, RSA, is the Secretary of the Maryland Court Reporters Association.   She has been an Official Court Reporter at D.C. Superior Court in Washington, D.C. for 17 years.  From 2000 to 2003, she was a freelance court reporter in Washington D.C. Margary has a Bachelor of Science Degree in Court Reporting, an Associates Degree as a Legal Assistant and a Concentration in Psychology from Johnson & Wales University in Providence, Rhode Island, all obtained 1998 to 2000.   In 2008, she completed the Realtime Master Workshop with Anita Paul.   She has earned the RPR in 2011, RSA certification in 2009, and has recently passed the CRC Written Knowledge test.  She is now practicing to pass the CRC Skills portion to obtain her CRC.

In addition to giving back, Margary is a member of the NCRA and has been a seminar speaker at NCRA and MCRA annual conventions and conferences.  Ms. Rogers has participated in promotion and marketing events for Court Reporting & Captioning Week at her job, in her community and via social media.  She was a member of the NCRA’s Peers Helping Peers Committee and has written articles for the JCR, one article in particular entitled “What are you thinking about?”   In 2020, Ms. Rogers created a Facebook entitled “Stenographers Leveling up with Certifications” a group to encourage and promote court reporters to obtain court reporting certifications.  This group also featured and interviewed in the JCR Weekly in May 2020.

Ms. Rogers is passionate about her profession and is always seeking to sharpen her skills.  She tries to attend every annual convention and participate in the NCRA annual business meetings.  She participates in promotion and marketing events for National Court Reporting & Captioning Week at D.C. Superior Court.   She is a member of the Values Change Team at D.C. Superior Court in the Court Reporting Division.  As a member of the VCT, Margary, along with the other members of her team organize and facilitate meetings, seminars and workshops where she promotes the values, mission, and goals of the Court as a whole.

In 2010, Margary graduated from the Management Training Program at D.C. Superior Court.  Margary believes in being the best you can be in your profession and always giving back to a cause that is dear to your heart.

Margary is the proud mother of one little girl, seven-year-old Ava.

Treasurer
I grew up and went to school in Georgetown, Delaware, and then my family moved to Rehoboth.   After a friend of my father’s suggested court reporting as a profession, I went to the Stenotype Institute of Washington, which later became Strayer College.    After completing school, three years, I started working on Capitol Hill doing freelance work, covering hearings and other functions.

A job was offered to me to move to the Eastern Shore and work as an official in the court system, traveling to the different counties of the First Judicial Circuit, to include Dorchester, Worcester, Somerset, and Wicomico Counties.  I travelled the circuit for a few years and then was offered the job to stay permanently in Worcester County.

I have served as President and Board Member of the Maryland Court Reporters Association over the years, serving as Treasurer for many years in the early 2000’s.

I volunteered to be Treasurer again in 2019.

Danielle Lawrence
Secretary
I was born and raised in Sofano County, Northern California. After graduating high school I joined the California Army National Guard and served four years as an Army medic and an operating room technician. Before and while pursuing my court reporting degree I worked as a secretary for various foster care agencies. Upon graduating with my M in court reporting in 2015, I moved to Maryland and have been a court reporter in the DMV area ever since. When I was a court reporting student I attended the MCRA convention and remember how encouraging and motivating it was for me. I’m happy to now be a part of the organization that inspired me when I was a student.
Kyle Kingsley
Board Member
I started court reporting school in 2006 at Harford Community College and took a job at Gore Brothers Reporting in 2007 working in production where I learned a lot about reporting and the duties of being a court reporter. I worked there until I graduated from school in 2013. I then became a freelance court reporter and continue to do so. I taught court reporting theory for Baltimore City Community College from 2014-2015. I live in Baltimore City with my husband and daughter, two cats and a dog.
Sherry Knox

Board Member
Sherry Knox was born in Washington, D.C. and was raised by her mother and father in nearby Prince George’s County, Maryland, along with her two sisters and one brother. She went on to court reporting school right out of high school. Sherry is a stenographer by trade and currently works as a CART Provider/Captioner. Sherry graduated from court reporting school in 1993 and her first job was captioning for a Washington, D.C. local news station; it was a fascinating time for her. Sherry has an extensive background in stenography, having done depositions, court room work, captioning, onsite CART, remote CART and has worked for a vast amount of entities. One of her mottos she keeps near to her heart is she’s a constant student. Though Sherry has been reporting for over 25 years, staying abreast and current in her profession is very important to her. In her pastime you may find Sherry working out, gardening, shopping, eating blue crabs, scrapbooking, crafting, and spending time with her daughter and granddaughter.

I received my degree in Court Reporting from Villa Julie College (now Stevenson University) in Stevenson, Maryland, in 1993. While attending my final year of school, I worked part-time with Dave Schafer at his freelance firm, which helped fill in some of the things they don’t teach you in school, such as bill collecting and transcript production.

In 2013, Dave Dawson retired from Worcester County, and I was lucky enough to be his replacement. After twenty years of freelance, I was excited to try something new and stop worrying about booking jobs.

My husband, Charles, and I live on the Eastern Shore, in Westover, Maryland. He is retired from the Maryland State Police and now serves as the Clerk of Court for Somerset County. We have two kids, a senior and a fifth grader.

Serving Maryland Court Reporters since 1949. The MCRA website is designed and hosted by CourtReporter360.com